Of a Swedish gentleman and his Maltese fish

It was yesterday reported in the online version of the Times of Malta that the notorious blooms of the jellyfish Pelagia noctiluca (Forsskål, 1775), which are reported once every few years around the Mediterranean and elsewhere, are still making appearances around the Maltese Islands well into winter. The summer months of 2009 were definitely not lacking in these swarms, several hundreds of specimens were in fact observed by the author in several places along the Maltese coast, including Ta' Xbiex, Birzebbuġa and Għar Lapsi. The following picture was taken in September at Baħar iċ-Ċagħaq, and shows one unfortunate individual in its death-throes after being washed by waves onto the sand.

In related news, the comparatively harmless (to humans) but larger jellyfish Cassiopea andromeda (Forsskål, 1775) has been reported for the first time in Malta, more accurately the Marsamxett harbour. The habitat needed by this tropical species is only provided in sheltered muddy areas, so it is unlikely that any substantially problematic populations will be established anytime soon.

Quite coincidentally, both these jellyfish were described by the same Swedish gentleman and contemporary of Linnaeus, namely Pehr Forsskål (below), who lived a tragically short life from 1732 to 1763 before succumbing to malaria. So how do these jellyfish bear the '1775' suffix, one might ask?

Carsten Niebuhr, another naturalist of the period, was entrusted with the posthumous editing of Forsskål's manuscripts, culminating in the 1775 publication 'Descriptiones Animalium - Avium, amphiborum, insectorum, vermium quæ in itinere orientali observavit Petrus Forskål'. This contained the descriptions according to the then-new Linnaean system of these two coelenterates (then Medusa noctiluca and Medusa andromeda) and of several other organisms including fish.

The most interesting thing pertaining to Malta in Forsskål's book is the inclusion of the Maltese names of fish accompanying the Latin descriptions in the part entitled 'Catalogus Piscium Melitensium' - Catalogue of Maltese Fish. Thus Squalus spinax is also Chelp il Bahar, Sparus dentex is i Dentici and Sparus auratus is l'Aurada. The man was known to give specific names based on ethnic languages with which he came into contact with, so these scientific names could constitute the oldest appearances of the Maltese language in the science of taxonomy. 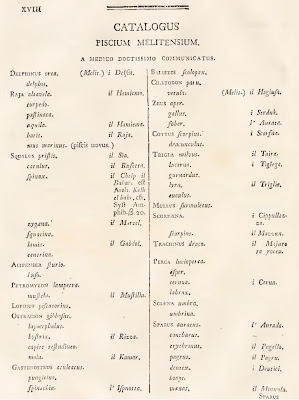 Zammit Maempel, G., 1992. The Arabian voyage of 1761-67 and Malta: Forsskål and his contribution to the study of local natural history. Melita Historica: Reprints from proceedings of history week 1992: 35-76.